The opening of the new campus has allowed for the creation of a club devoted to model rocketry.  There is ample space in which to launch a variety of rockets, from the “Wizard,” standing just 12 inches tall to the Saturn 1B, which towers over three feet high.  Students meet after school to build model rocket kits under the tutelage of Mr. Renner.  There are currently over fifteen members of the rocket club.

Members pay for and build their own kits, and launch them on school-owned launch pads about every two weeks. While the rocket engines can only be used once, the rockets themselves are equipped with parachutes or streamers for a safe descent to earth, allowing them to be flown over and over.  The first launch of the year took place on Monday morning, October 13, with fifteen successful launches and recoveries.

Rocket Club Meetings are usually held  on Tuesdays, after school at 2:20 PM in room 116. All are invited.  Please contact Mr. Renner for more information. 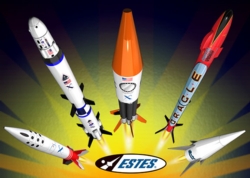