St. Michael's Abbey is located in the picturesque foothills of the Saddleback Mountain near Silverado, California. The abbey was founded in 1961 by a group of seven refugee priests from the Norbertine abbey of Csorna (CHOR-na) in Hungary. 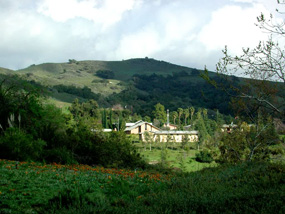 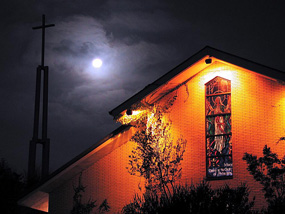 Today the community numbers over 70 priests and seminarians and is one of the most flourishing monasteries of the Order. The priests are dedicated to the educational apostolate in Southern California high schools including Mater Dei in Santa Ana, St. Michael's Prep in Orange County, Santa Margarita in Rancho Santa Margarita and Mary Star of the Sea in San Pedro.

A dependent house, The San Pedro Priory was established in San Pedro in 1991 with a view to serving the Mary Star of the Sea Schools. The community's principal external apostolate is the education and formation of youth.

The shield of St. Michael's Abbey. The wing recalls the heavenly patronage of St. Michael the Archangel. The Fleur de lisevokes the French origins of the Order. Behind the shield is the Shepherd's staff, symbolizing the office of the abbot who is head of the abbey. The Order's Latin motto surrounds the shield "Prepared for every good work." For information about St. Michael's abbey please visit abbeynews.org.